Over-50 Workers Need Not Apply 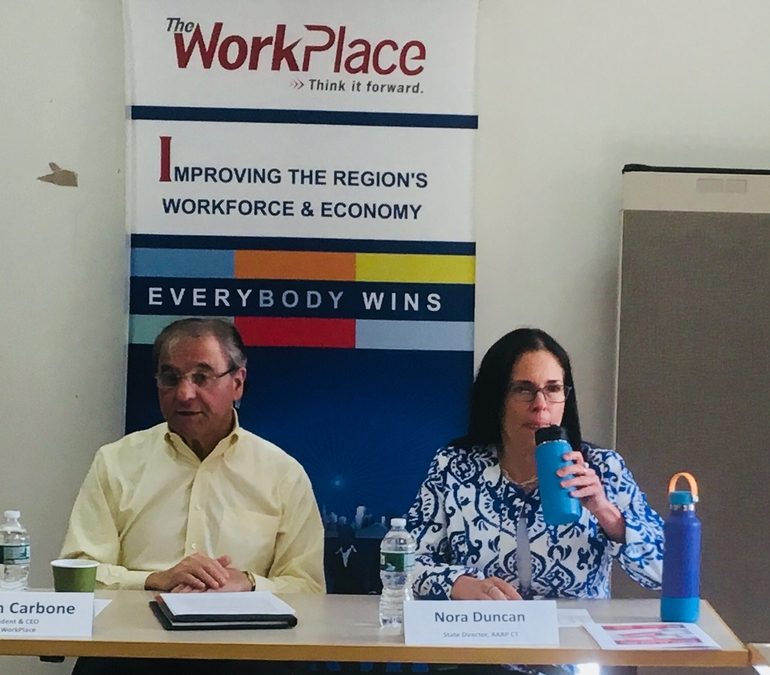 Workforce development has become an issue of urgency in commercial Connecticut, especially for companies with employment needs they can’t fill.

One element of the workforce that is already “developed” is older workers — but they’re often hiding in plain sight. Underemployment of workers over age 50 was the subject of a Tuesday morning panel roundtable discussion co-hosted by the WorkPlace and the Connecticut chapter of AARP at the former’s New Haven office.

“We hear every day that in the midst of this economy, there are more jobs than there are people to fill them,” said WorkPlace President and CEO Joe Carbone, who introduced and moderated the discussion.

And that is true, particularly in Connecticut, Carbone added. But the darker side to that equation is that older workers who could fill those positions are not getting the employment opportunities their skills and experience might otherwise merit.

Research from AARP indicates that nearly two out of three workers age 45 and older have seen or experienced age discrimination on the job, and among the 61 percent of respondents who reported age bias, 91 percent said they believe such discrimination is common.

Carbone added that some discrimination against over-50 workers is predicated on stereotypes — that older employees are not technology-savvy, and providing them with health insurance and other benefits will be more costly than providing equivalent compensation to younger workers.

The result is that “It may look like a healthy labor market,” Carbone said, “but it’s freezing some people out.”

Carbone was joined on the panel by Nora Duncan, state director of the Connecticut chapter of AARP. Duncan said her group was working to address the issue of underemployed older workers with a three-pronged approach — advancing legislation to protect over-50 workers, helping to give workers more tools through education initiatives, and working with employers directly to help them see the benefits of leveraging an underused employment asset.

Anthony Coppola of North Haven is an out-of-work IT/finance manager. “I’ve applied for jobs for which I was qualified 1,000 percent,” he said, but he was rejected when employers discovered he was “older.” The bias is made more insidious by remaining unspoken. “No one comes out and says, ‘You’re too old,’” Coppola said. “But you feel it subtly.”

And although employment laws prohibit potential employers from asking job candidates’ date of birth on employment applications, “That just puts off the inevitable,” Coppola said. When job candidates show up for an in-person interview, “They know,” he said.

Another 50-plus panel member, Bryne Barrenger, worked for Proctor & Gamble for 20 years before being laid off. She looked for employment for months and watched her IRA evaporate before she finally accepted a job at Lowe’s — for $12 an hour. She later was promoted to supervisor — and given a raise to $14 an hour.

Barrenger said employers could benefit from older workers’ strong work ethic, reliability and willingness to work hard — she herself put in 60-hour weeks at Lowe’s. “I knew nothing about paint or appliances,” Barrenger said. “But I’m learning.”

Also participating in the panel was State Rep. Mitchell Bolinsky, a four-term Newtown Republican who, at age 60, said he had himself felt the sting of age discrimination. “I am so sorry about what’s going on in Hartford,” Bolinsky told the group, adding, “If you’re against tolls and new taxes, I’m your guy.”

“The economy is humming in 49 states,” Bolinsky said. “What the reason it’s not in Connecticut? Because we’re a bunch of heavy-handed, overtaxing buffoons.”