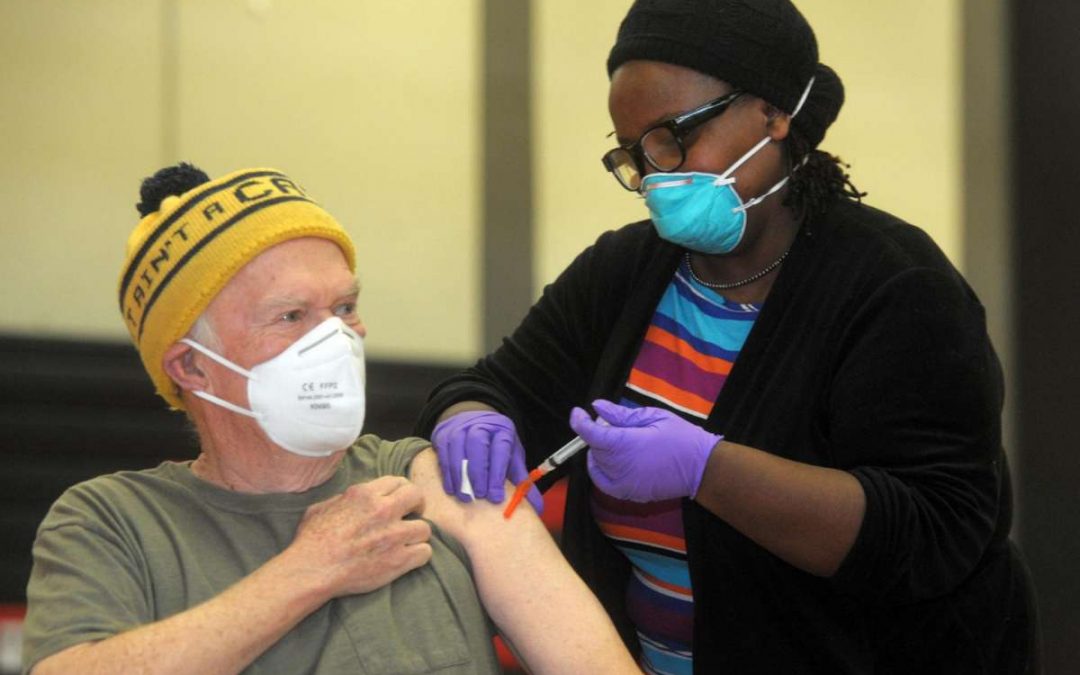 BRIDGEPORT — Scott Wilderman, president of Career Resources, is used to helping people find jobs but now his nonprofit will be undertaking another mission: Helping elderly residents obtain the coronavirus vaccine.

Career Resources is joining City Hall’s efforts to simplify the complicated process of registering online with the federal Vaccine Administration Management System, or VAMS, to schedule an appointment to receive two necessary doses.

Currently only healthcare and emergency responders and people 75 years and older qualify.

Beginning Friday at the senior apartments at Harborview, Career Resources will offer a mobile classroom typically used for job training and recruitment for computer access and hands-on assistance to older residents seeking to use VAMS.

“I think I know technology pretty well. I could understand it,” Wilderman said Tuesday of his own experience helping his mother-in-law sign up for her vaccination. “But it’s not the most user-friendly mechanism for anybody.”

Rowena White, Bridgeport’s director of communications, agreed. She said VAMS requires a computer, the internet and an email address, things that “the most vulnerable population in the state and the city” may not have access to.

Besides Career Resources’ mobile classroom — which is borrowed from another Bridgeport nonprofit, The WorkPlace — White said the city is also assisting the elderly through its senior center hot line, 203-576-7993. That phone number is manned Monday through Thursday, 10 a.m. to 2 p.m.

And, White said, municipal staff will be available at the city-run mass vaccination site at Central High School, which is open Wednesdays and Saturdays, to also register patients. “It will take approximately an hour for each individual to go through the entire process from start to finish,” she said.

Wilderman said given the limited space within the mobile classroom, Harborview is taking appointments from its tenants to ensure all of the social distancing guidelines required to stop the spread of coronavirus will be followed within the vehicle. Future stops at other locations around the city will be announced.

He cautioned that this is a new undertaking. “We’re going to try it,” he said. “We figure doing something is better than doing nothing.”

Wilderman added anyone wishing to volunteer their time and experience in helping with the vaccination registration effort can email him at wilderman@careerresources.org.

Bridgeport’s effort to ramp up elderly vaccinations comes as data released by the state shows how much work remains across Connecticut, but particularly in heavily-populated urban areas, to provide shots to the 75 and older age group even as officials plan to open up the process to other categories. As of Feb. 1, 1,613 first vaccination shots had been administered to Bridgeport’s 6,914 seniors who are 75 and above.

“We’re going to work with you to help you do better,” Lamont said of the cities Monday. “We’re going to help catch up there, and make sure this incredibly vulnerable population gets their dose. I would like to think that within 10 days, two weeks, we’re going to be making available the vaccines to the 65-and-above group as well.”

White noted that Bridgeport is not only the most populous city but does not have as many nursing homes/long-term care facilities as other municipalities, where the operators can more quickly register their buildings’ populations and administer shots.

“Our seniors are individuals on their own,” she said.

However Bridgeport’s vaccination program is also moving ahead without a health director. Lisa Morrissey suddenly resigned from that position in early January. She could not be reached for comment.

Before launching a months-long search for her replacement, Bridgeport decided to hire a health consultant to analyze that department and also help manage the continuing COVID response.

White said interviews of consultants are underway and “we’re looking forward to having an announcement soon.”

Ludwig Spinelli is head of Bridgeport-based Optimus Healthcare, which has been running a vaccination site at Hall Neighborhood House. Spinelli said one challenge is predicting the availability of doses.

“No one wants to schedule more appointments than you think you’re going to have vaccine. Then you’ve got to call the people and cancel,” he said Tuesday, adding: “The state has been very supportive of trying to get us more vaccine.”

He also echoed the concerns about VAMS: “A lot of the seniors don’t have access to computers, email. So they need some guidance.”

Spinelli noted there could also be some fear or hesitation on the part of individuals to obtain their shots. “We didn’t have 100 percent of our staff take it,” he said. “We had about two thirds. … We can’t force people. We recommended it. The (Optimus) leadership took it. Some people may just be afraid. I had mine. Knock on wood it didn’t bother me at all.”